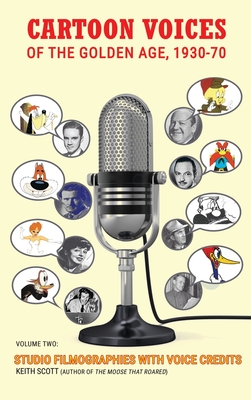 Volume Two of CARTOON VOICES is the massive reference companion to Volume One. This is the information for which animation enthusiasts have been waiting. Based on thirty two years of painstaking research in archives and libraries, this volume features an exhaustive listing of thousands of theatrical cartoons, containing never-before-published voice credits for hundreds of obscure acting talents who until now remained unidentified.

While various vintage cartoon voice mysteries are still to be solved, the one-of-a-kind information in this volume finally confirms hundreds of hitherto uncredited voice artists for the first time in decades.

Keith Scott has spent over forty years as an internationally recognized cartoon voice actor and impressionist. He narrated two George of the Jungle movies, and was the voice of both Bullwinkle J. Moose and the Narrator in The Adventures of Rocky and Bullwinkle. He is the author of The Moose That Roared and many articles on animation and Hollywood radio history.