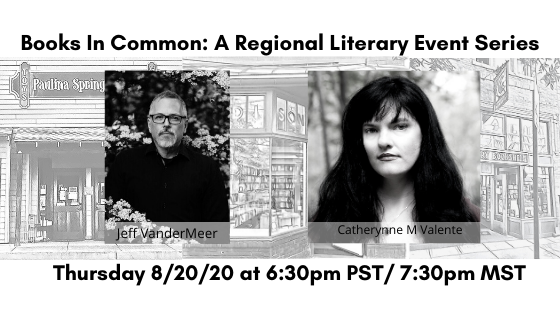 Books in Common NW is delighted to welcome two award-winning bestselling authors - Catherynne M Valente and Jeff Vandermeer for an out-of-this-world conversation about all things weird, science-y and fantastical.

Catherynne M. Valente is the New York Times bestselling author of forty works of speculative fiction and poetry, including Space Opera,  The Refrigerator Monologues, Palimpsest, the Orphan’s Tales series, Deathless, Radiance, and the crowdfunded phenomenon The Girl Who Circumnavigated Fairyland in a Ship of Own Making (and the four books that followed it). She is the winner of the Andre Norton, Tiptree, Sturgeon, Prix Imaginales, Eugie Foster Memorial, Mythopoeic, Rhysling, Lambda, Locus, Romantic Times’ Critics Choice and Hugo awards. She has been a finalist for the Nebula and World Fantasy Awards. She lives on an island off the coast of Maine with a small but growing menagerie of beasts, some of which are human.

Jeff VanderMeer’s New York Times - bestselling Southern Reach trilogy has been translated into over 35 languages. The first novel, Annihilation, won the Nebula Award and Shirley Jackson Award, and was made into a movie by Paramount in 2018. Recent works include Dead Astronauts, Borne (a finalist for the Arthur C. Clarke Award), and The Strange Bird. These novels, set in the Borne universe, are being developed for TV by AMC. Called “the weird Thoreau” by The New Yorker, VanderMeer frequently speaks about issues related to climate change and storytelling. He lives in Tallahassee, Florida, with his wife Ann, cat Neo, and a yard full of native plants.

A Peculiar Peril (The Misadventures of Jonathan Lambshead #1) (Hardcover)

The Boy Who Lost Fairyland (Paperback)

The Girl Who Raced Fairyland All the Way Home (Paperback)