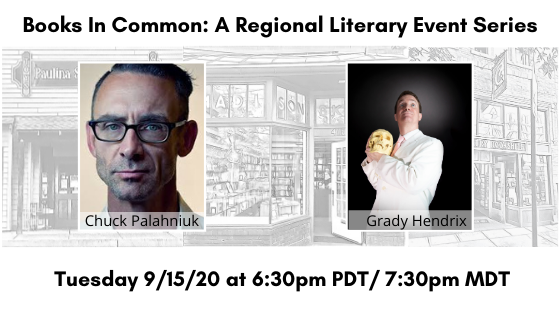 Books in Common NW can’t wait to welcome Chuck Palahniuk to share his newest book The Invention of Sound, in which a father searching for his missing daughter is suddenly given hope when a major clue is discovered, but learning the truth could shatter the seemingly perfect image Hollywood is desperate to uphold. Chuck will be joined in conversation by horror aficionado Grady Hendrix who’s newest book is The Southern Book Club’s Guide to Slaying Vampires — Steel Magnolias meets Dracula in this supernatural thriller set in South Carolina in the '90s, about a women's book club that must that must do battle with a mysterious newcomer to their small Southern town who turns out to be a real monster. We hope you’ll join us for a suspenseful evening!

More about The Invention of Sound: Gates Foster lost his daughter, Lucy, seventeen years ago. He's never stopped searching. Suddenly, a shocking new development provides Foster with his first major lead in over a decade, and he may finally be on the verge of discovering the awful truth. Meanwhile, Mitzi Ives has carved out a space among the Foley artists creating the immersive sounds giving Hollywood films their authenticity. Using the same secret techniques as her father before her, she's become an industry-leading expert in the sound of violence and horror, creating screams so bone-chilling, they may as well be real.Soon Foster and Ives find themselves on a collision course that threatens to expose the violence hidden beneath Hollywood's glamorous façade. A grim and disturbing reflection on the commodification of suffering and the dangerous power of art, The Invention of Sound is Chuck Palahniuk at the peak of his literary powers -- his most suspenseful, most daring, and most genre-defying work yet.

More about The Southern Book Club’s Guide to Slaying Vampires: Patricia Campbell's life has never felt smaller. Her husband is a workaholic, her teenage kids have their own lives, her senile mother-in-law needs constant care, and she's always a step behind on her endless to-do list. The only thing keeping her sane is her book club, a close-knit group of Charleston women united by their love of true crime. At these meetings they're as likely to talk about the Manson family as they are about their own families. One evening after book club, Patricia is viciously attacked by an elderly neighbor, bringing the neighbor's handsome nephew, James Harris, into her life. James is well traveled and well read, and he makes Patricia feel things she hasn't felt in years. But when children on the other side of town go missing, their deaths written off by local police, Patricia has reason to believe James Harris is more of a Bundy than a Brad Pitt. The real problem? James is a monster of a different kind--and Patricia has already invited him in. Little by little, James will insinuate himself into Patricia's life and try to take everything she took for granted--including the book club--but she won't surrender without a fight in this blood-soaked tale of neighborly kindness gone wrong.

More about Chuck Palahniuk: Chuck Palahniuk has been a nationally bestselling author since his first novel, 1996's Fight Club, was made into the acclaimed David Fincher film of the same name. Palahniuk's work has sold millions of copies worldwide. He lives outside Portland, Oregon.

More about Grady Hendrix: Grady Hendrix is an award-winning novelist and screenwriter living in New York City. His books include Horrorstör, about a haunted IKEA, My Best Friend's Exorcism, We Sold Our Souls, and this year's New York Times bestseller, The Southern Book Club's Guide to Slaying Vampires. He's also the author of the non-fiction book, Paperbacks from Hell, a history of the horror paperback boom of the '70s and '80s, and his screenplays include Mohawk (2017) and Satanic Panic (2019).

The Invention of Sound (Hardcover)

We Sold Our Souls: A Novel (Paperback)

Consider This: Moments in My Writing Life after Which Everything Was Different (Hardcover)