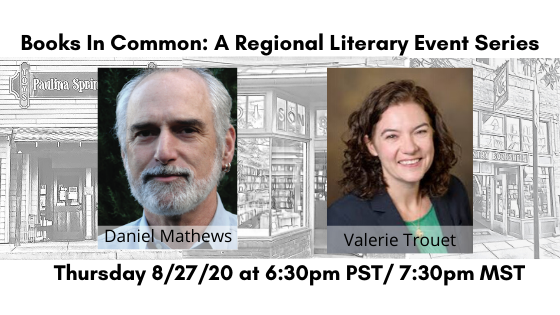 Books in Common NW is pleased to welcome naturalist Daniel Mathews and paleoclimatologist Valerie Trouet as they discuss  the fascinating story of trees and climate change. Daniel's new book Trees in Trouble tells the troubling story of the devastating and compounding effects of climate change in the Western and Rocky Mountain states, told through in-depth reportage and conversations with ecologists, professional forest managers, park service scientists, burn boss, activists, and more.

In her captivating new book, Tree Story, Valerie Trouet reveals how the seemingly simple and relatively familiar concept of counting tree rings has inspired far-reaching scientific breakthroughs that illuminate the complex interactions between nature, climate, and people. Join us for a great conversation between two bright minds working in climate science.

To join the conversation visit: https://zoom.us/j/94711672882?pwd=M2Y2ZXljczdwWGVSdWlpeFVweHlQZz09

DANIEL MATHEWS is the author of Natural History of the Pacific Northwest Mountains, Rocky Mountain Natural History, and Cascade-Olympic Natural History. During a career of learning and writing about the natural history of western North America, he has backpacked far and wide, watched for fires from Desolation Peak Lookout, watched a forty-foot fir crash onto his family's house in a storm, and lived for years in a forest cabin without electricity, heating with firewood and writing by kerosene lamp. He lives in Portland, Oregon.

Valerie Trouet is a paleoclimatologist who uses the rings in trees to study the climate over the past ~2,000 years and how it has influenced ecosystems and human systems. She is an Associate Professor in the Laboratory of Tree-Ring Research at the University of Arizona. Born and raised in Belgium, where she received a PhD in Bioscience Engineering at the KULeuven in 2004. She has been a dendrochronologist for almost two decades and her research focuses on the climate of the past ~2,000 years and how it has influenced human history and ecosystems. She has used tree rings to study hurricanes, snowpack, wildfire, and the jet stream. Her research has brought her to sub-Saharan Africa, Siberia, the Californian Sierra Nevada, and the Balkans, where she was part of a team that found the oldest-known (1,075 years!) living tree in Europe.

Tree Story: The History of the World Written in Rings (Hardcover)