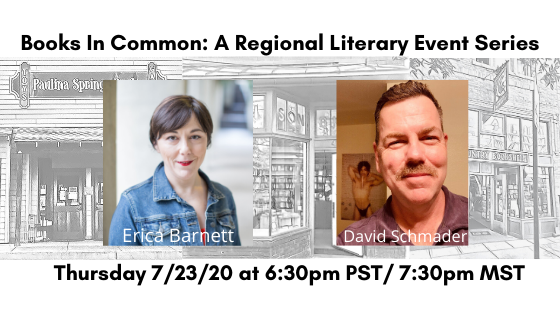 Erica C. Barnett is a Seattle-based political reporter. She started her career at the Texas Observer, the venerable progressive magazine cofounded by Molly Ivins, and went on to work as a reporter and news editor for the Austin Chronicle, Seattle Weekly, and The Stranger. She now covers addiction, housing, poverty, and drug policy at her blog, The C Is for Crank. She has written for a variety of local and national publications, including The Huffington Post, Seattle Magazine, and Grist. She got sober in February 2015.

David Schmader is a writer and performer devoted to exploring his obsessions, from homophobic rock stars and conversion therapy to cannabis and trash cinema. From 1998-2015, Schmader was a staff writer and editor at The Stranger, Seattle’s Pulitzer-winning newsweekly, where he wrote the issue-opening column “Last Days: The Week in Review” for 18 years. His solo playsLetter to Axl, Straight, andA Short-Term Solution to a Long-Term Problem have been produced in Seattle and across the US. In 2016, his book Weed: The User’s Guide was published in the US and the UK

To register for this event please visit https://www.crowdcast.io/e/vr0bep8s/register

Quitter: A Memoir of Drinking, Relapse, and Recovery (Hardcover)