Books in Common: Johanna Garton presents Edge of the Map 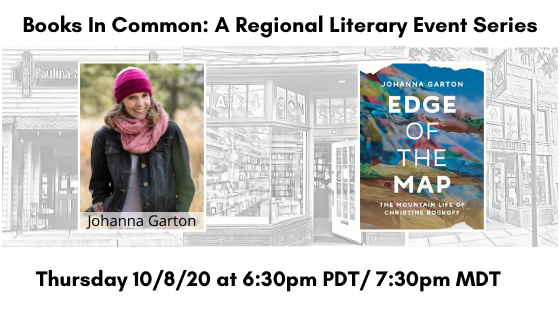 Books in Common NW welcomes Johanna Garton to share her book Edge of the Map: The Mountain Life of Christine Boskoff.

Join journalist Johanna Garton sharing her book Edge of the Map - a book equal parts inspiring, dramatic, and heartbreaking. One of America's greatest high altitude mountaineers, Christine Boskoff was at the top of her career when she and her partner died in an avalanche in 2006. Charismatic, principled, and humble, Boskoff was also a deeply loved role model to her climbing partners and the Sherpa community.

Edge of the Map traces the sharp twists and turns in Boskoff's life, from her early years as a Lockheed engineer, through her first successes in the climbing world, to her purchase of Seattle-based Mountain Madness after owner and climber Scott Fischer died in the 1996 Everest disaster. Her life was one of constant achievement mixed with personal tragedy. The story follows Boskoff as she perseveres and moves on to even bigger peaks, earning acclaim as a world-class mountaineer, then later as she finds an alpine partnership with legendary Colorado climber Charlie Fowler.

Johanna Garton is a mother, proud Wisconsin girl, writer and cross country coach. Before the publication of her first book, she dabbled in nonprofit consulting, college teaching and had a brief but quickly extinguished career as a lawyer. She's moved her family to China, been charged by an elephant, run 20-plus marathons and is addicted to sweaty, 6:00 AM yoga classes. Among the things she's trying to do better are reading road maps, keeping the family dog out of the garbage can, baking the perfect apple pie and being on time for anything, anywhere. She and her husband share their home in Denver with two bright children who are much wiser than she is and the inspiration for all her storytelling.

Edge of the Map: The Mountain Life of Christine Boskoff (Paperback)