Books in Common: Steve Olson in Conversation with Sharma Shields 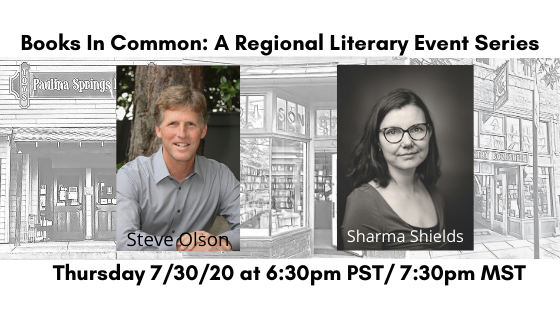 Books in Common welcomes science writer Steve Olson  (The Apocalypse Factory) and award-winning author Sharma Shields (The Cassandra) in conversation about their new books colliding in the Atomic Age.

Steve Olson is author of Eruption: The Untold Story of Mount St. Helens, which Amazon named one of the 20 best nonfiction books published in 2016 and which was shortlisted for the Boardman Tasker Prize for Mountain Literature. He also is the author of Mapping Human History: Genes, Race, and Our Common Origins, which was nominated for the National Book Award, and other books, and he has written for the Atlantic Monthly, Science, the Smithsonian, and many other magazines. Since 1979, he has been a consultant writer for the National Academy of Sciences, the President’s Council of Advisors on Science and Technology, and other national scientific organizations. A native of Washington State, he now lives in Seattle.

Sharma Shields is the author of a short story collection, Favorite Monster, and two novels, The Sasquatch Hunter’s Almanacand The Cassandra. Sharma’s short stories and essays have appeared in The New York Times, Electric Lit, Catapult, Slice, Slate, Fairy Tale Review, Kenyon Review, Iowa Review, Fugue, and elsewhere and have garnered such prizes as the 2020 PNBA Award, 2016 Washington State Book Award, the Autumn House Fiction Prize, the Tim McGinnis Award for Humor, a Grant for Artist Projects from Artist Trust, and the A.B. Guthrie Award for Outstanding Prose. She received her B.A. in English Literature from the University of Washington (2000) and her MFA from the University of Montana (2004). Sharma runs a small press, Scablands Books, and is a contributing editor for Moss. A current employee of Wishing Tree Books in Spokane, Sharma has worked in independent bookstores and public libraries throughout Washington State. She lives with her husband (writer and graphic novelist Simeon Mills) and their two children.

Please register for this event by visiting https://www.crowdcast.io/e/a6nzto7d/register

The Apocalypse Factory: Plutonium and the Making of the Atomic Age (Hardcover)

The Cassandra: A Novel (Paperback)