THIS EVENT HAS BEEN POSTPONED. We will reschedule when it is prudent, but books are still available, and we'd be happy to get them signed for you.

We are delighted to welcome local author Betsy Gaines Quammen to share her new book, American Zion: Cliven Bundy, God, and Public Lands in the West. American Zion is the story of the Bundy family, famous for their armed conflicts over public lands in the West. The family connects the history of their antagonism back to the very first Mormons who fled the Midwest for the Great Basin. Today their cowboy confrontations are a dramatic example of the rift between competing ideas of public lands ownership, wildlife stewardship and personal freedom. 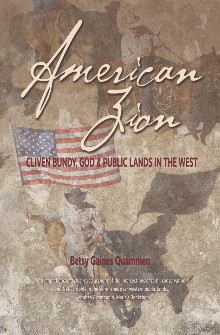 What happens when members of an American religion, one built in the nineteenth century on personal prophecy and land proprietorship, assert possession over western public land with guns and a certainty that God wants them to go to war? American Zion explores an incendiary land-use war launched from Bunkerville, Nevada, an hour’s drive from Las Vegas, by a man named Cliven Bundy and his large Mormon family. The Bundys’ conflict traces back to when the first Latter-day Saints came west, bringing militant beliefs, legitimate grievances, and certainty of claiming a God-promised homeland called Zion. During their early years in the West, some Mormon people spilt blood defending their lands. As evidenced by Bundy’s crusade, some are willing to do the same today.

Talking to folks in casinos, roadside diners, living rooms, and on horseback, environmental historian Gaines Quammen takes the reader on a journey through the New West, one still haunted by white settlement, violence, and an enduring sense of entitlement. She raises important questions about public lands—the 640 million acres of national parks, monuments, refuges, forests, and wilderness that we as Americans share. By exploring the rights of Native people, the role of the Mormon church, the legend of the cowboy, the state of public lands and the women and men who depend upon them, Gaines Quammen demonstrates that Cliven Bundy’s war, one based on religious zealotry, is contributing to an ongoing lawlessness in the West.

Betsy Gaines Quammen is a historian and conservationist. She received a doctorate in Environmental History from Montana State University in 2017, her dissertation focusing on Mormon settlement and public land conflicts. She has studied various religious traditions over the years, with particular attention to how cultures view landscape and wildlife. The rural American west, pastoral communities of northern Mongolia, and the grasslands of East Africa have been her main areas of interest. After college in Colorado, caretaking for a bed and breakfast in Mosier, Oregon, and serving breakfasts at a café in Kanab, Utah, Betsy has settled in Bozeman, Montana, where she now lives with her husband, writer David Quammen, three huge dogs, an overweight cat, and a pretty big python named Boots.

This event is free and open to the public. Most of our events are held upstairs, but we do not have an elevator. Please contact us with any accessibility concerns. To join the signing line and have books signed by the author at this event, please consider purchasing your copy of American Zion from Country Bookshelf, either in-store, over the phone, or online. By purchasing your book from Country Bookshelf, you are not only supporting a locally owned, independent business, but you are also showing publishers that they should continue sending authors to Country Bookshelf. The author's previous titles will be available for purchase at the event as supplies last.