Rick McIntyre & THE REDEMPTION OF WOLF 302 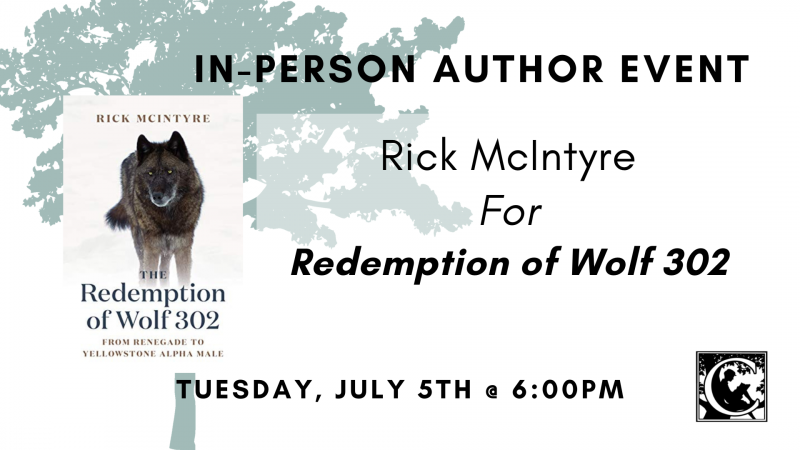 Join Rick McIntyre for another riveting evening of storytelling as he shares the unorthodox story of Wolf 302 with the third installment of The Alpha Wolves of Yellowstone series.

From the renowned wolf researcher and author of The Rise of Wolf 8 and The Reign of Wolf 21 comes a stunning account of an unconventional alpha male.

A lover, not a fighter. That was wolf 302. A renegade with an eye for the ladies, 302 was anything but Yellowstone's perfect alpha male. For starters, he fled from danger. He begged for food from other wolves, ditched females he'd gotten pregnant, and even napped during a heated battle with a rival pack! But this is not the story of 302's failures. This is the story of his dramatic transformation. And legendary wolf writer Rick McIntyre witnessed it all from the sidelines. As McIntyre closely observed with his spotting scope, wolf 302 began to mature, and, much to McIntyre's surprise, became the leader of a new pack in his old age. But in a year when game was scarce, could the aging wolf provide for his family? Had he changed enough to live up to the legacies of the great alpha males before him? Recounted in McIntyre's captivating storytelling voice and peppered with fascinating insights into wolf behavior, The Redemption of Wolf 302 is a powerful coming-of-age tale that will strike a chord with anyone who has struggled to make a change, big or small.

No one has spent more time observing and documenting wild wolves than retired National Park ranger Rick McIntyre, who has watched wolves in America's national parks for more than 40 years, 25 of those years in Yellowstone, where he has accumulated over 100,000 sightings. McIntyre's other books include The Rise of Wolf 8 and The Reign of Wolf 21, and he is at work on a fourth book about Wolf 06 and other Yellowstone alpha females. He lives in Silver Gate, Montana.

The Redemption of Wolf 302: From Renegade to Yellowstone Alpha Male (Hardcover)

The Rise of Wolf 8: Witnessing the Triumph of Yellowstone's Underdog (Paperback)

The Reign of Wolf 21: The Saga of Yellowstone's Legendary Druid Pack (Paperback)

The Alpha Female Wolf: The Fierce Legacy of Yellowstone's 06 (Hardcover)