One Book - One Bozeman: The Weight of an Infinite Sky

One Book - One Bozeman is a community-wide read program designed to encourage engaged discussion and literacy through the reading of a common book. The Bozeman Public Library is partnering with Bozeman Schools and local businesses to bring a successful and comprehensive program to our town to promote community building and civic engagement.

This year One Book One Bozeman is delighted to welcome acclaimed author Jess Walter to share his bestselling novel The Cold Millions. 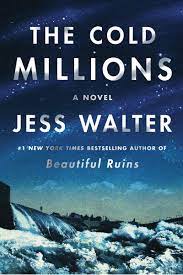 "The Cold Millions is a literary unicorn: a book about socio-economic disparity that's also a page-turner, a postmodern experiment that reads like a potboiler, and a beautiful, lyric hymn to the power of social unrest in American history. It's funny and harrowing, sweet and violent, innocent and experienced; it walks a dozen tightropes. Jess Walter is a national treasure." -- Anthony Doerr, author of All the Light We Cannot See

An intimate story of brotherhood, love, sacrifice, and betrayal set against the panoramic backdrop of an early twentieth-century America that eerily echoes our own time, The Cold Millions offers a kaleidoscopic portrait of a nation grappling with the chasm between rich and poor, between harsh realities and simple dreams.

Featuring an unforgettable cast of cops and tramps, suffragists and socialists, madams and murderers, The Cold Millions is a tour de force from a "writer who has planted himself firmly in the first rank of American authors" (Boston Globe).

For more information on all One Book One Bozeman events please visit: www.bozemanlibrary.org/obob

The Cold Millions: A Novel (Paperback)

“One of the most captivating novels of the year.” – Washington Post

The Cold Millions: A Novel (Hardcover)

“One of the most captivating novels of the year.” – Washington Post